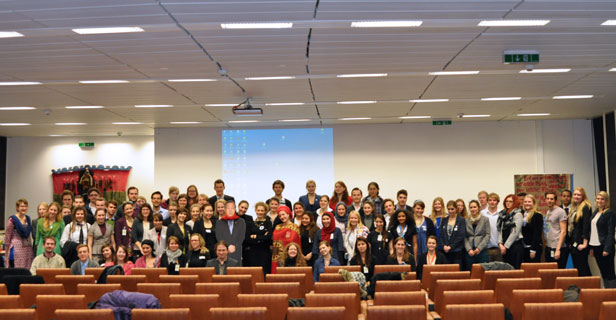 Model United Nations on "Scarcity of Resources and Sustainable Economy"

In cooperation with the United Nations Information Service (UNIS) in Vienna, the Department of International Development at the University of Vienna organized a Model United Nations conference in the Vienna International Centre (VIC) on 17 January 2013. The event was held for the 6 th time within the framework of the seminar "International development in a historical context".

While working on the Model UN topic "Scarcity of Resources and Sustainable Economy" the students took on the roles of delegates from UN Member States, regional representatives as well as representatives from NGOs and international institutions such as the World Trade Organization (WTO),the Organization for Economic Co-operation and Development (OECD) and the European Union (EU). The idea was to simulate a UN General Assembly session.

In her welcome speech UNIS Public Information Officer Irene Hoeglinger-Neiva, outlined the benchmarks of the conference: "Sustainable economy and responsible management of resources are not only the global challenges of our time but are also the main priorities of the United Nations."

In the modern world, where economic and geopolitical changes occur frequently, sustainability becomes the major parameter for development, emphasized the invited expert Florian Leregger from the Ecosocial Forum. The lecturer of the seminar "International Development in Historical Context" Wolfgang Gruber stressed the importance of the conference being held under such realistic conditions that it would contribute to the first-hand experience of the participants.

After a long negotiation process the parties agreed to adopt three out of six submitted resolutions. Throughout the conference, as the students recognized, the most crucial thing was to be aware of the responsibility for representing associated regions. While facing certain restrictions that influenced the negotiation process the participants realized the importance of diplomacy as the most important tool for international negotiations.

The Model United Nations once again provided a comprehensive learning platform for multilateral dialogue which is likely to benefit today's students in their future careers.