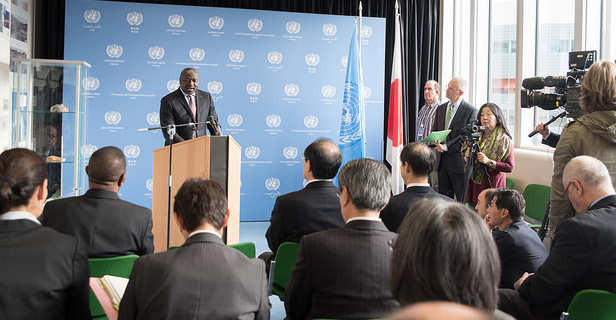 VIENNA, 17 November 2015 - A new exhibition showing the devastation to the cities of Hiroshima and Nagasaki from the atomic bombing 70 years ago, has been opened at the Vienna International Centre (VIC).  Artefacts which were exposed to the effects of the atomic blasts in the two Japanese cities are also on display and the exhibition can now be seen as part of the guided tours of the UN in Vienna.

Meeting survivors of the two atomic bombings reminded the Executive Secretary of the Preparatory Commission for the Comprehensive Nuclear-Test-Ban Treaty Organization (CTBTO), Lassina Zerbo, when he has visited Hiroshima, of what the city had suffered and put into sharp focus the threat posed by nuclear weapons.

Exhibitions like this, he said, are important, because the survivors will not be with us forever to pass their experience on to the younger generation and the artefacts on display are "testaments to the hell unleashed on the men, women and children of  Hiroshima and Nagasaki".

Mr. Zerbo reminded the audience of around 100 ambassadors, diplomats and UN staff that while the exhibition is called 'Towards a nuclear free world', we do not yet have even a nuclear-test free world, but he said it is within our reach to achieve this.  CTBTO has created a monitoring system which means no nuclear test will escape detection, but without entry into force of the treaty a nuclear arms race could resume.

Also speaking at the opening was the Deputy Director-General of the UN Office at Vienna (UNOV), and the Director of the Division for Management, Dennis Thatchaichawalit, who said the exhibition and the artefacts on display were a stark reminder of the destruction caused by the atomic bombing of Hiroshima and Nagasaki in 1945.  "They are a testament to the horrendous power of nuclear weapons to kill in an instant, while sending ripples through the generations to come." He said the exhibition also sends a powerful message about a more hopeful future: "One where we can all live away from the long shadow of nuclear weapons and weapons of mass destruction."

Mr. Thatchaichawalit reminded the audience that the very first resolution of the General Assembly  established the goal of eliminating all nuclear weapons and weapons of mass destruction as only this can ensure that they are never used again.

The exhibition will enable many of the 55,000 visitors who join guided tours of the VIC every year to learn more about the UN's efforts in the field of disarmament.

Joining the opening was the Mayor of Hiroshima, Kazumi Matsui, who is also President of the Mayors for Peace initiative which aims for a nuclear-free world by 2020.  He was pleased to see the exhibition opening at the UN in Vienna, as there were already such displays in New York and Geneva. In this 70 th anniversary year of the atomic bombings in Japan the Mayor said it was "crucial to continue our efforts to hand down our experiences to the world" and the survivors' message  that "no one else should ever suffer as they did"  should be widely heard so people could see the absolute evil of nuclear weapons.

The Permanent Representative of Japan, Ambassador Mitsuru Kitano, said the small exhibition had a very strong message to deliver on nuclear disarmament. Japan as co-chairs of the Article XIV process with Kazakhstan took a forward-looking approach on this. The Article XIV process helps promote the entry into force of the Comprehensive Nuclear-Test-Ban Treaty. Ambassador Kitano said Japan would spare no effort in promoting global nuclear disarmament, "so as to never repeat the tragedies of Hiroshima and Nagasaki".

The event was moderated by the UNIS Vienna Director, Martin Nesirky, who invited all the guests to take a look at the exhibition and recommended new ambassadors and others, if they have not already done so, to take a guided tour of the VIC as a good induction to the UN in Vienna.

The exhibition is the result of a cooperation between the UN Information Service in Vienna and the Permanent Mission of Japan, the cities of Hiroshima and Nagasaki with the support of CTBTO and the UN Office for Disarmament Affairs in Vienna. 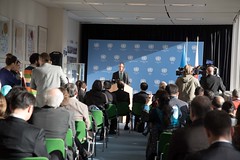