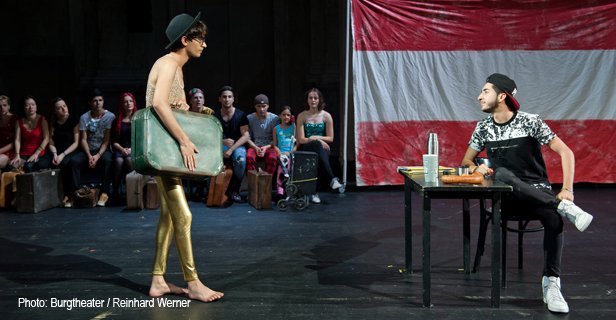 Chanting in unison, the actors take to the stage, apologising yet demanding to be heard.

The young actors are also refugees, performing in the "Junge Burg" production of "Gimme Shelter", which celebrated its premiere on 19 June in the Casino Schwarzenbergplatz. Featuring a cast of 30 young refugees from 12 different countries, the piece incorporates a mix of acting, dance, and song. The collage format reveals the multiplicity of stories that make up the refugee experience.

"Junge Burg" is an initiative of Vienna's famous Burgtheater, which organizes theatre projects for young people. Following the suggestion of and in cooperation with the United Nations Information Service (UNIS) Vienna and the Office of the UN High Commissioner for Refugees (UNHCR) in Austria,  the Junge Burg-team developed a new theatre workshop for young refugees and asylum seekers.

The topic of refugees and asylum-seekers is frequently discussed in Austrian media and society, but rarely are the voices of the refugees in question heard. "Gimme Shelter" is an attempt to change the way refugees are portrayed. The performance was developed in a collaborative process, featuring contributions and stories from the young actors who refuse to let themselves be defined by their refugee status alone.

The project was also a testimony to the potential of theatre and the arts in general to aid integration. All participants spoke German to varying degrees, and rehearsals would often produce interesting and creative results that became part of the final piece. By the end of the one-year rehearsal period, many participants have been able to greatly improve their German language skills as well.

The play was performed against the backdrop of World Refugee Day, which is observed every year on 20 June with the aim of drawing attention to the plight of the millions of people around the world forced to leave their home countries due to war, conflict and persecution.

The collaboration with "Junge Burg" and the theatre workshop is a continuation of a long-standing partnership between UNIS Vienna and the UN Refugee Agency (UNHCR) with various local partners to raise awareness about the situation of refugees among Austrian youth and society.  Other joint projects on this topic are regular workshops for teachers on how to teach the UN and refugee protection in schools, the Youth Short Film Competition on Human Rights in cooperation with This Human World film festival and special guided tours during the UNHCR Long Day of Flight.