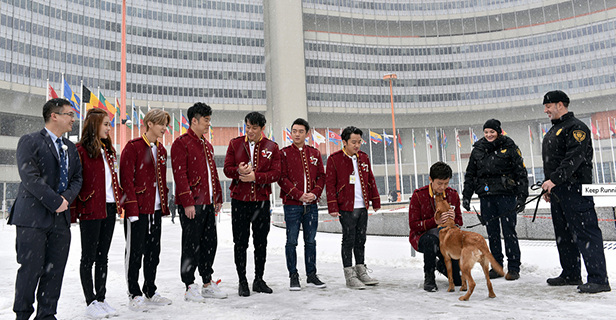 A new episode of the popular Chinese reality show "Keep Running" that was shot at the United Nations in Vienna was aired Friday 13 April. A trailer can be viewed here: https://bit.ly/2IKHMxq

The full episode can be watched online: https://www.youtube.com/channel/UCfj8FsoiPFHn1gZMJaeLEDg

Seven leading Chinese celebrities including actors, singers, film directors, a fashion model and a racing driver are giving their support to the Sustainable Development Goals after a visit to the United Nations in Vienna. The celebrities came to Vienna to film an episode of the popular Chinese youth reality TV show 'Keep Running', which is watched by millions in China and beyond.  As part of the programme they were set a challenge: to research and prepare a speech about one or two of the Goals which they had to deliver in English at Vienna's City Hall.

On a snowy morning in March the celebrities, Deng Chao, Angelababy, Li Chen, Chen He, Zheng Kai, Wong Cho Lam and Lu Han, visited the Vienna International Centre. There they took a guided tour in Chinese with one of UNIS Vienna's multi-lingual tour guides. Their tour included a special meeting with the Security team's K9 unit and its newest member, nine-month-old puppy Prince, but they also walked the well-trodden path followed by more than 55,000 other visitors who come to the UN in Vienna every year to learn about the United Nations and the Sustainable Development Goals. They visited a real UN conference room, posed for selfies with life-sized cut-outs of UN peacekeepers, admired an actual piece of the moon on loan from NASA, and had fun guessing what a leather shoe on display may have to do with achieving the SDGs.  At the end of their tour, a surprise was waiting for the group when they met the Director of the UN Office for Outer Space Affairs, Simonetta di Pippo who handed the contestants their challenge.

Later in the evening at a Youth Forum in the ornate setting of City Hall, the celebrities delivered their speeches on the Sustainable Development Goals before audience of more than 500 people. They were joined by six speakers from different Vienna-based UN organizations who spoke about their work to achieve the Goals.

The live event was hosted by the City of Vienna and compered by Margareta Griessler-Hermann from the Vienna's Mayor Office. The Director of the UN Information Service (UNIS) in Vienna, Martin Nesirky, introduced the Sustainable Development Goals. For the United Nations Industrial Development Organization, Gender Coordinator Hedda Femundsenden gave some examples of how UNIDO is helping women to set up their own businesses and find decent work through entrepreneurship courses, online e-learning and business development training.

An unusual aspect of the work of the International Atomic Energy Agency (IAEA) was highlighted in the speech by Janet Chen, Associate Climate Change Impact Analyst in the Soil and Water Management and Crop Nutrition Laboratory. She explained how nuclear and isotopic techniques can improve agricultural yields and quality which can help alleviate hunger and poverty.

For the UN Office on Drugs and Crime, Margaret Akullo, Project Coordinator in the Human Trafficking and Migrant Smuggling section, spoke of her own personal experience of living through conflict as a child, and how she feared whether anyone would protect her family. UNODC is trying to ensure people trying to move to a place of safety during conflicts, and who can be vulnerable to being exploited by human traffickers, are protected and kept safe. This is helping to achieve Goal 10, reducing inequalities, and Goal 16 on peace, justice and strong institutions.

The surprising ways that space technology is helping to achieve responsible consumption and production as well as protecting life on land was explained by Markus Woltran, Programme Officer, United Nations Office for Outer Space Affairs.

The celebrities gave their speeches on Goals 3, 4, 6, 7, 9, 13 and 17. The only woman member among the group, Angelababy, in her speech about Goal 3, mentioned UNODC's Youth Crime Prevention through Sports initiative under the Doha Declaration. She made a call for the use of sport to help young people develop life skills, strengthen social inclusion, and stay away from violence, crime and drugs while having fun.

A video shown at the Forum demonstrated the four great modern-day inventions of China - mobile payments, high-speed rail, shared bicycles and e-commerce, showing the importance of industry, innovation and infrastructure. Wong Cho Lam and Lu Han spoke about the key role of UNIDO and how its Bridge for Cities event is advancing Goal 9. They believe that innovative inventions can benefit the world through cooperation between countries, which is linked to the idea of partnership, Goal 17.

The TV show, which is aimed at young people from the age of 16, was broadcast on Zhejiang Satellite TV channel on Friday 13 th April and is also available on YouTube: www.youtube.com/runningmanchina

The Vienna-based UN organizations were delighted to have the opportunity to spread the word about the work being done in Vienna to help achieve the Sustainable Development Goals to so many young people through the TV show.

UNIS Vienna coordinated with colleagues from the UN Office on Drugs and Crime, the UN Industrial Development Organization, the UN Office for Outer Space Affairs, the International Atomic Energy Agency and the Comprehensive Nuclear-Test-Ban Treaty Organization to work with the production team and celebrities.

The seven film, TV and singing stars, have a combined social media following of more than 500 million people, on the Chinese platform Weibo and also on Instagram.

It is hoped the TV show will encourage other young people in China and beyond to become interested in the Sustainable Development Goals and organize their own Youth Forum-style events, as well as taking action to achieve the Goals.