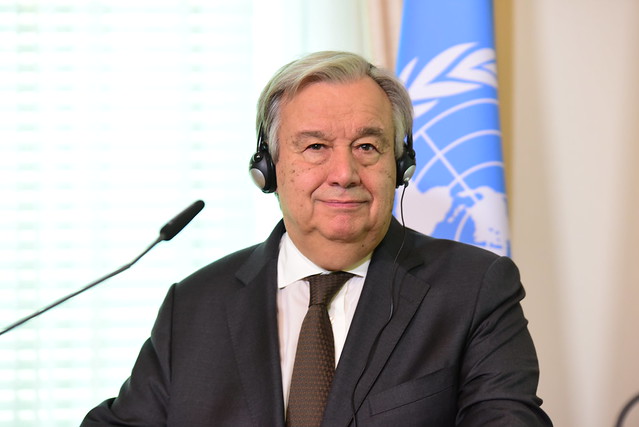 VIENNA – On his first official visit to Austria, UN Secretary-General António Guterres met the President, Chancellor and Foreign Minister as well as staff working at UN Headquarters in Vienna.

The UN Secretary-General also addressed the 27th session of the UN Commission on Crime Prevention and Criminal Justice. He commended their work and that of the UN Office on Drugs and Crime, saying they worked on “some of the most challenging problems the international community faces today: transnational crime, human trafficking, corruption, drug policy, cybercrime”.

Cybercrime, he said, is estimated to generate some 1.5 trillion US dollars in revenue per year, and as with most crime, it targets the most vulnerable. New technologies “should enable us to create conditions for growth and development that benefit everyone, to combat and mitigate the impact of climate change and to protect our environment”, he said.

Before coming to the Vienna International Centre on Monday 14 May, the Secretary-General had held a series of meetings with senior Austrian leaders. Firstly with the Austrian Chancellor Sebastian Kurz, followed by the Austrian President, Alexander Van der Bellen, and then Austrian Foreign Minister Karin Kneissl.

In his remarks to the press after meeting the Chancellor, the Secretary-General welcomed the recent announcement by the Democratic People’s Republic of Korea (DPRK) of its intention to close the nuclear test site at Punggye-ri. He said this could be an important confidence-building measure which “will contribute to further efforts towards sustainable peace and verifiable denuclearization of the Korean peninsula”.

The Secretary-General also said that he was particularly worried about what was happening in Gaza, with a number of people killed. Following his meeting with the Foreign Minister, the Secretary-General said that Israel must “calibrate its use of force and minimize the use of live fire”. He reiterated the need for a political solution, saying: “Only with a two-State solution will we be able to have Israelis and Palestinians living in peace and security between the two.”

While talking to the media after meeting the President, the Secretary-General expressed his deep gratitude and appreciation to Austria as “an exemplary host country for United Nations offices and activities -- offices and activities that are gaining more and more centrality in relation to the political challenges of today”.

At the Vienna International Centre, the UN chief met heads of Vienna-based UN agencies and held a townhall meeting with staff.

“Vienna is not a place for the UN to shrink; Vienna is a place for the UN to grow,” the Secretary-General told staff at the packed townhall meeting, to much applause. The Secretary-General spoke about the important work being done at the UN headquarters in Austria, ranging from nuclear topics and tackling drugs and crime to peaceful uses of outer space and aiding industrialization in developing countries.

Before speaking to staff he saw a short video introducing the work of the Vienna-based UN organizations, as it was his first visit to the Vienna International Centre as Secretary-General.

On Tuesday, 15 May, the Secretary-General attended the R20 Austrian World Summit on climate change, alongside Austrian-born superstar and climate activist, Arnold Schwarzenegger. The summit is Austria's largest gathering of leading international climate experts, and people from politics to business.

The Secretary-General told the summit that of the challenges of the world he faces every day, none looms so large as climate change: “If we fail to meet the challenge, all our other challenges will just become greater and threaten to swallow us.

“Climate change is, quite simply, an existential threat for most life on the planet – including, and especially, the life of humankind.”

The UN chief said we must use all our resources and build a sense of urgency to tackle it.

Welcome to the UN in Vienna:

See more photos of this visit:

‘Much work to do and no time to waste’ in cybercrime fight, says UN chief