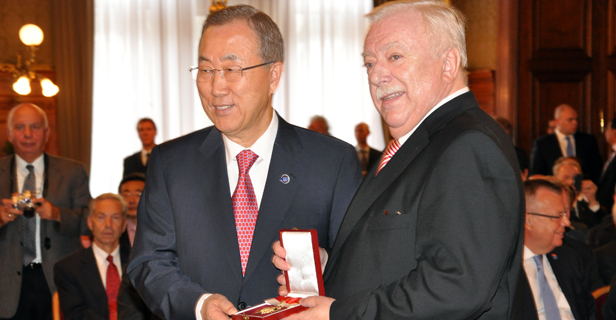 By half past nine on 29 August 2013 the distinguished guests have arrived at Vienna City Hall, the reporters stop chatting about yesterday's events, a select group of musicians from the famous Vienna Philharmonic take their seats - all goes quiet, with a sense of expectation in the air.

The Stadtsenatssitzungssaal is packed with every seat taken, all the camera teams and journalists in the city are waiting patiently behind the cordon to the side of the audience. Vienna City Hall was built for days like this, its grandiose setting perfect for an award ceremony. And then the guest of honour arrives to cameras clicking and the Mayor of Vienna Michael Häupl guides the Secretary-General Ban Ki-moon to his seat at the front.

Behind him in the front row are the Mayor, Mrs. Ban along with the Head of the United Nations in Vienna Yury Fedotov and his wife, and guests from the permanent missions. Ban Ki-moon is to receive an award from the city of Vienna, the Grand Decoration of Honour in Gold for Services to the Province of Vienna reflecting his time as Ambassador of the Republic of Korea to Austria and also now as UN Secretary-General.

Mayor Häupl in his speech points out Ban's achievements to Austrian-Korean relations such as establishing the Korean cultural centre in the Danube park and the set-up of a joint orchestra. Thanking the Mayor for the award Ban says: "I am proudly Viennese now." He had visited Vienna more often than Korea in the last year he added. During previous visits he had said that he had "left half of his heart in Vienna" - and he told the City Hall audience to much amusement that he had to come back from time to time to check that this half of his heart was still working, still functioning.

To full applause, Ban, in good German, congratulated the Mayor on last week's success of his football team.

After the musicians play one more piece to conclude the ceremony, Ban resumes his UN Secretary-General role and steps in front of the cameras, ready to take the questions from the reporters about the crisis in Syria.

He reiterated that diplomacy and peace must be given a chance: "I said the use of chemical weapons by anyone, for any reason, under any circumstances are crimes against humanity and that must be held accountable and we are working very hard and I have been working with leaders of the world how we can keep peace and facilitate dialogue, that is my duty."

He had spoken to President Obama the previous day and expressed his wish that the team investigating the use of chemical weapons in Syria be allowed to continue their work: "I told him that we will surely share the information and the analysis of samples and evidence with Members of the Security Council and UN members in general."

In response to a question about whether the inspectors stay in Syria could be extended he said: "They will continue their investigation activities until tomorrow, Friday, and will come out of Syria by Saturday morning and will report to me as soon as they come out of Syria and that is why I have cut short my visit to Austria." This is the big news of the day, the inspection team will have a few more days to finish their work.

Before the City Hall event the Secretary-General had met the Austrian Foreign Minister Michael Spindelegger and afterwards he had a meeting with President Fischer and Chancellor Faymann, then returned immediately to New York cancelling his participation at the European Forum Alpbach 2013.