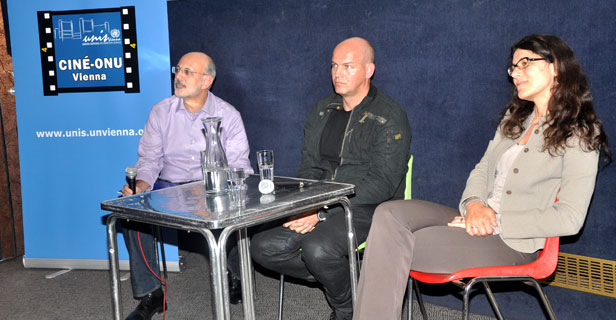 "The Fixer - the taking of Ajmal Naqshbandi"

"This work is very dangerous, I bring one enemy to meet another," said Ajmal Naqshbandi about his work as a fixer in Afghanistan. This was about six months before he was brutally murdered by the Taliban.

On the occasion of World Press Freedom Day, which is celebrated every year on 3 May, the United Nations Information Service Vienna (UNIS) in cooperation with this human world (THW) Film Festival and Topkino, screened the documentary "The Fixer - The Taking of Ajmal Naqshabandi" by Ian Olds and produced by Nancy Roth and Christian Parenti.

The film kicks off with the kidnapping of Ajmal along with Italian reporter Daniele Mastrogiacomo, and their driver Sayed Agha by a Taliban group led by infamous Mullah Dadullah. Mastrogiacomo is released after a few weeks, whereas Naqshbandi's fate remains unclear, before his beheaded corpse was returned to his relatives. The driver, of no use to the kidnappers, was killed right away.

The hand-held camera recordings show the relationship between Christian Parenti, and his Afghan local fixer, Ajmal Naqshabandi. A fixer is a local person who serves as a translator, someone who bridges cultural differences between the foreigner and his interviewee and who knows how to set up interviews with the people of interest to the foreign journalist.

Christian Parenti a journalist with the American weekly journal The Nation, had hired Ajmal Naqshbandi as a fixer six months before his Italian colleague did so, and had filmed their trips to remote Taliban ruled areas and improvised interviews with Taliban leaders. Ajmal helps him to discover the country with its corruption and its ever growing insurgency.

The subsequent panel discussion featured the Deputy Editor of Wiener Zeitung Thomas Seifert, the International Press Institute's (IPI) Press Freedom Manager Barbara Trionfi and UNIS Vienna Director Janos Tisovszky. Having worked with fixers in several war torn countries, Thomas Seifert confirmed the strong relationship which often develops with a fixer. The journalist heavily depends on the fixer's local understanding, his ability to assess security situations and last but not least his contacts. Asked about how to trust a fixer, Mr. Seifert said that fixers were motivated to do this risky job, primarily by money but had to build a reputation of trust to get work with incoming journalists. In the film this becomes evident when Ajmal talks to a friend in his mother tongue, explaining that: "Money matters, because these people don't have friendship. They don't know anything about it. They know you while you're working with them, but after that they don't even recognize you".

Barbara Trionfi gave an insight into her work as a Press Freedom Manager with IPI. She emphasized the focus the organization puts on advocacy, talking to governments about imprisoned journalists in their countries and how IPI offers security training for journalists.