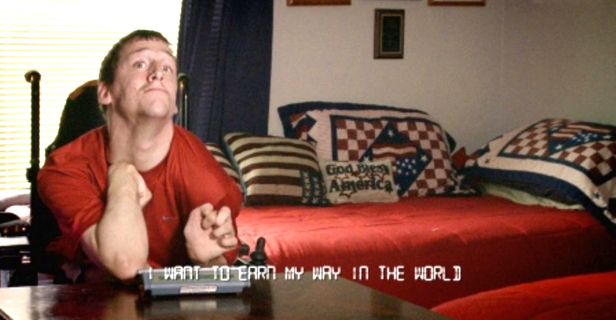 TJ suffers from cerebral palsy and lives every day in a wheelchair. Using sign language, he says: "I want to earn my way in the world." People living with disabilities represent the largest and most disadvantaged group in the world and TJ is one of about five million Americans living with disabilities. He used to work for Lott Industries, one of America's most successful workplaces for people with developmental disabilities. The story of TJ and Lott Industries is told in the documentary by Victor Buhler called "A Whole Lott More", screened on 2 December 2013 by the United Nations Information Service (UNIS) in cooperation with human world (THW) Film Festival and Topkino. The screening marked the International Day of Persons with Disabilities, celebrated every year on 3 December, and was part of the regular film screenings by Ciné-ONUVienna.

The film looks at the struggles of Lott Industries, which used to provide manufacturing jobs for 1,200 workers with disabilities and to compete successfully for auto industry contracts until the collapse of the local auto industry in neighbouring Detroit, since which Lott has struggled to keep its doors open. The film also examines the wider world of employment options for people with disabilities. It focuses on TJ, Kevin and Wanda, who have different disabilities but share an eagerness to work, and showcases their admirable resilience, making the case for greater employment opportunities for all.

The film was followed by a panel discussion, which featured Hansjörg Hofer, Head of the Section for Integration of People with Disabilities of the Austrian Federal Ministry of Labour, Social Affairs and Consumer Protection, Stephan Spatt, Head of Human Resources and Organizational Development at Licht für die Welt (Light for the World) and Janos Tisovszky, Director of UNIS.

Mr. Hofer explained that the disability policy of Austria implements the UN Convention on the Rights of Persons with Disability through its National Action Plan for Disabilities and includes 250 measures to provide equal employment opportunities and financial security for people with disabilities. Companies with more then 25 employees must meet a quota system of four per cent of employees with disabilities. Mr. Hofer said that companies have to set concrete goals and time frames for reaching the target of four per cent disability employment. Unlike the United States, people with disabilities receive a minimum wage in Austria and a part of their income is paid by the Austrian government. As a result, they do not have to be reliant on their families to support them.

Just as the film calls for action, so did the panel at Ciné-ONU. Large numbers of people with disabilities remain neglected and socially excluded. We need to find new ways of helping people like TJ, Kevin and Wanda achieve their dream of becoming self-supporting, just like everyone else.