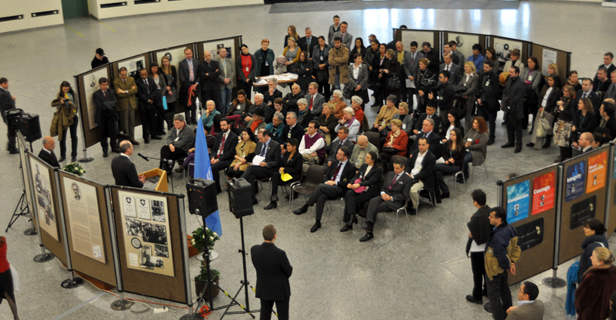 The 2013 observance of the International Day of Commemoration in Memory of the Victims of the Holocaust was built around the theme "Rescue during the Holocaust: The Courage to Care". The exhibit featured dramatic stories of diplomats from different countries, cultures and backgrounds who by the end of the war had saved tens thousands of lives. These stories collectively constitute one of the largest rescue of Jews and others persecuted by the Nazis during the Holocaust.

In his opening speech UNIS Vienna Director Janos Tisovszky underlined the utmost importance of this observance. Such events are aimed "to serve as a warning against hatred for humanity". Moreover, as Mr. Tisovszky said, the acts of diplomatic heroism that are the focus of this-year's commemoration, have a particular significance for people working in and with the United Nations.

The message by the United Nations Secretary-General was delivered by the Deputy Director-General of the United Nations Office at Vienna (UNOV), Mazlan Othman, on behalf of the Director-General of UNOV. In his message the Secretary-General emphasized the following: "Although acts of genocide illustrate the depths of evil to which individuals and whole societies can descend, the examples of these brave men and women also demonstrate the capacity of humankind for remarkable good, even during the darkest of days".

Following this, the floor was given to Philippe Scholtes, Director of the Agribusiness Development Branch who spoke on behalf of the Director-General of the United Nations Industrial Development Organization (UNIDO). He said that the gloom of Yad-Vashem - the main place for the Holocaust remembrance must remind us of the potential dangers and, consequently, about the responsibility we have.

The ceremony was closed by the speech of Ambassador Aviv Shir-On, the Permanent Representative of Israel to the United Nations (Vienna). In his address he marked out the unique deeds of the diplomats which demonstrated the supremacy of generous human spirit. Ambassador Shir-On stressed that remembering the diplomats' daring acts of rescue is and will be an integral part of the Jewish people's tribute to them: "The stories of those people, provide us with an inescapable reminder that we always have a choice. Then, the main question for us is: do we have the courage to care?".

The heroes of the film "The Rescuers" that was screened in the UNIS Cinema Room after the opening ceremony definitely answered this question in the affirmative. The stories about twelve diplomats who, at the expense of their careers and sometimes their lives, saved thousands of Jews who were destined for near certain death, touched those who saw it. Let us hope that the examples of these diplomats will always be the guiding light for those standing at such a crossroads who face these choices.

The Holocaust and the United Nations Outreach Programme

United Nations Secretary-General Ban Ki-moon: Message on the International Day of Commemoration in Memory of the Victims of the Holocaust