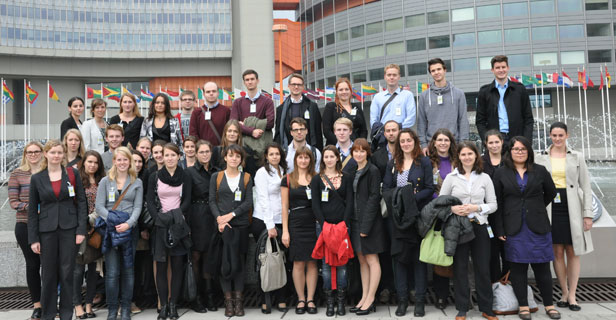 The 'shadowing' experiences of the participants were as diverse as their fields of studies: some of them had the chance to accompany an IAEA staff member to the Seibersdorf Laboratories just outside Vienna. Others had the possibility to attend the "International Conference on Topical Issues in Nuclear Installation Safety" in the VIC organized by the IAEA. Two students even 'shadowed' the spokesperson of the Executive Director of UNODC Yury Fedotov,  David Dadge.

As part of the 'Shadowing Programme', the students also attended a guided tour of the VIC followed by an introductory presentation from UNIS Director Janos Tisovszky. They are also attending a career workshop in November to share their experiences and to learn more about career opportunities within the United Nations. After last year's successful programme and the positive feedback from participants, this year students from Hungary, Slovenia and Slovakia were invited to participate. "I think this is an excellent programme, which gives the students the opportunity to learn," said a United Nations staff member. The 'Shadowing Programme' aims to raise awareness of the work of the United Nations and make it more transparent and accessible to the public.