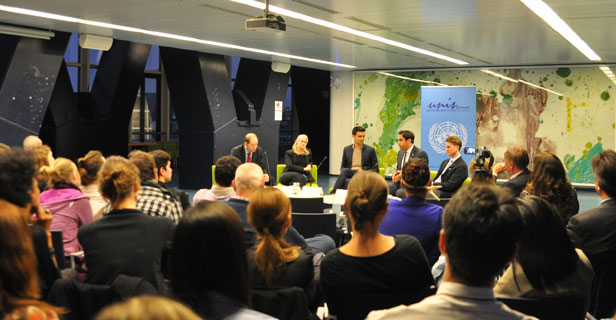 Official visit of the UN Envoy on Youth to Vienna

It has been three busy days for the Secretary-General's first ever Youth Envoy, Ahmad Alhendawi. During his official visit to Vienna he not only attended the Annual Meeting of the United Nations Inter-Agency Network on Youth Development (IANYD) held from 12-14 March 2014, but also had the chance to engage directly with the Government of Austria and with young people living in Vienna, exchanging ideas on youth related issues.

The IANYD meeting gathered 40 UN entities who work with and for youth. A range of topics were discussed, including updates on IANYD's work, strategies to ensure youth involvement within IANYD, as well as the engagement of youth organisations and a joint communication plan. Sessions also addressed a progress report on the United Nations' System-Wide Action Plan on Youth (SWAP).

Apart from his participation in the IANYD sessions and several high-level meetings with Austrian government officials and other Vienna-based international organizations, the United Nations Information Service (UNIS) Vienna organized two events which gave a primarily young audience the unique opportunity to meet face-to-face with Ahmad Alhendawi.

The first event, a round-table discussion themed "Your world - your voice - Youth engagement in setting the global development agenda", took place on 13 March 2014 at the University of Vienna. The panel discussion was moderated by the young Austrian Press Agency (APA) reporter Alexander Fanta and as well as the Youth Envoy featured UNIDO Youth Employment Expert Matteo Landi, Andreas Schneider from the Ministry of Family and Youth and the Managing Director of Austrian National Youth Council, Christine Unterberger.

The Secretary-General's Envoy on Youth opened the discussion by sharing with the audience the challenges and experiences of his job and his priorities for the future. He referred to his first year in office as being "the most amazing year of my life so far, coming to represent and to advocate for the issues of 1.8 billion young people." He highlighted the fact that the world needed a "development contract" which would leave nobody behind and where investment in young people is guaranteed.

The second event, a Brown Bag Lunch, organized on 14 March 2014 on the premises of UNIS Vienna, offered UN Interns and Junior Professional Officers (JPOs) the opportunity to interact, ask questions and discuss youth-related issues with Mr. Alhendawi. Around 70 people came to meet him and find out more about his career, work and priorities. The Youth Envoy advised the young people to follow their passions and to be risk takers. He encouraged them to work with non-governmental organizations (NGOs) and the private sector to gather experience and find out how they can best make a contribution to the work the UN is pursuing.

When asked what he would like to be remembered for, the Secretary-General's Envoy on Youth mentioned the following: firstly, he is very committed to help more countries adopt national youth policies and he would like to strengthen the UN's role in creating or adopting those policies; secondly, he is advocating for a prominent role of youth related issues in the Post-2015 Development Agenda, where he wants to see concrete targets on youth with measurable indicators; finally, he would like to make the UN more accessible to young people and have more greater understanding how the UN could really serve them and what it meant to engage and work with the United Nations.