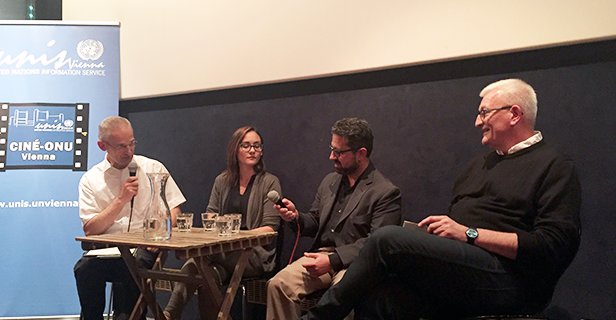 "I don't think we can change the world. I think that we change, and that changes the world," counsels Susie Crate. She is one of the protagonists of the documentary "The Anthropologist", which shows the impact of climate change on indigenous communities globally. Straight after its premiere at the DOC NYC Film Festival on 13 November 2015, it was shown at the 2015 Paris Climate Conference COP21 and now, on 26 September 2016, at Ciné-ONU Vienna.

The film follows the parallel stories of two popular Anthropologists; Margaret Mead who popularized cultural anthropology in America; and Susie Crate, an environmental anthropologist and is told from the unique perspective of their daughters. Mead and Crate demonstrate a fascination with how societies are forced to negotiate the disruption of their traditional ways of life, whether through encounters with the outside world or the unprecedented change wrought by melting permafrost, receding glaciers and rising tides. Crate's daughter, Katie, as well as Margaret Mead's daughter, Mary now 76, offer a fresh look not only at anthropology, but also the challenges of climate change. Filmed over the course of seven years, the Anthropologist is a meditation on change, both individual and societal.

The screening was followed by a discussion with the Co-director of the film, Seth Kramer, Professor Peter Schweitzer from the Department of Social and Cultural Anthropology of the University of Vienna and Johanna Kuchling, Campaigner and Project Coordinator from the Society for Threatened Peoples. The Director of the United Nations Information Service (UNIS) Vienna, Martin Nesirky, moderated the discussion.

Seth Kramer, spoke about making the film and the unique challenge working with a teenager. On one occasion he had to find his way to a Siberian village in the middle of nowhere, one of the field sites where Susie had done research. When he finally arrived, Katie, her daughter, decided she had a bad hair day and didn't want to be on camera. Creating a documentary on a serious topic like climate change can be a risk he said because you will never know how it will be perceived by the audience, but he added: "Even though climate change is a serious topic the movie is sometimes funny and not made in a vacuum." The story is not just a tragic story without hope. The film shows "human beings have the ability to change" which was interesting for him to learn during the shooting of it.

Professor Schweitzer talked about the challenges of being an anthropologist. "You have to be willing to be the child that learns. There is no place where it is easy, so you have to be ready to humiliate yourself". He spoke about his field experiences and how we can cope with the impact of climate change: "If anything is going to save us, it is local innovations".

Johanna Kuchling from the Society for Threatened Peoples raised awareness about the situation of indigenous peoples and that we have to be careful when approaching their communities: "Indigenous peoples already have sustainable ways to use their lands. We have to embrace that knowledge, we can learn a lot from them."

The Vienna screening was the film premiere of "The Anthropologist" in Austria, organized by the United Nations Information Service (UNIS) Vienna in cooperation with the Permanent Mission of the United States of America to the United Nations (Vienna), This Human World (THW) Film Festival and Topkino.