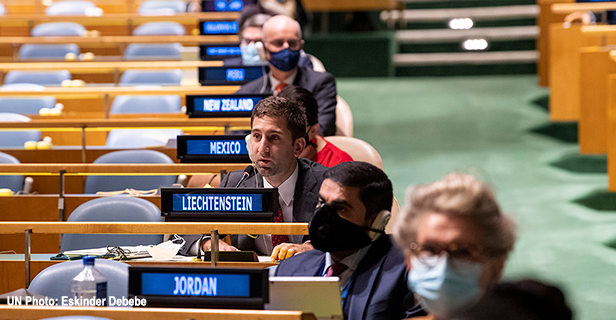 Information on the 75th session of the United Nations General Assembly and the President-elect, Volkan Bozkir, of Turkey

VIENNA, 14 September (UN Information Service) - The General Assembly of the United Nations opens its seventy-fifth session on Tuesday, 15 September, at 3 p.m., at the United Nations Headquarters in New York. In ongoing efforts to stem the spread of the coronavirus disease 2019 (COVID-19) pandemic, the opening plenary meeting of the session will be held with physical distancing arrangements that will accommodate in the Assembly Hall considerably fewer representatives of delegations, relative to the opening meetings of previous sessions.

President-elect of the 75th session of the General Assembly

Mr. Bozkir joined his country's foreign service in 1972 and has held several positions during his 39 year career including: Permanent Representative of Turkey to the European Union (EU); Ambassador to Romania; Foreign Policy Advisor to Prime Minister Turgut Özal and Deputy Undersecretary at the Ministry of Foreign Affairs responsible for EU Affairs. He was elected a Member of Parliament in 2011 and served for nine years. He was Minister for EU Affairs and Chief Negotiator from 2014 to 2016. He is married with two children and three granddaughters.

Priorities of the President

The President-elect has said that the theme of the 75 th anniversary "The future we want, the United Nations we need; reaffirming our collective commitment to multilateralism" will guide the general debate of the 75 th session.

He is fully committed to the goals of improving the living standards and the rights of women, ensuring their full and equal participation in all spheres of life and strengthening their status within society: "Women have been active agents of positive change. In this respect, women can play a unique role in reviving our collective commitment to multilateralism and a more inclusive vision for a better future."

He also wants to focus on achieving the Sustainable Development Goals (SDGs) with an emphasis on humanitarian action and with a priority on the Least Developed Countries.

The President-elect has said that efficiency, effectiveness, accountability and non-discrimination will be the guiding principles of his Presidency and his team will operate on the basis of openness, inclusivity and transparency.

In his acceptance speech, he said global problems require global responses: "Multilateralism is the most effective way to seek successful global solutions. The General Assembly, as the "parliament of the world" is uniquely situated to steer our multilateral efforts. This is why presiding over the United Nations membership is a big responsibility. I am aware of this and I will discharge this duty with utmost care."

Further information for the media about covering the United Nations General Assembly.