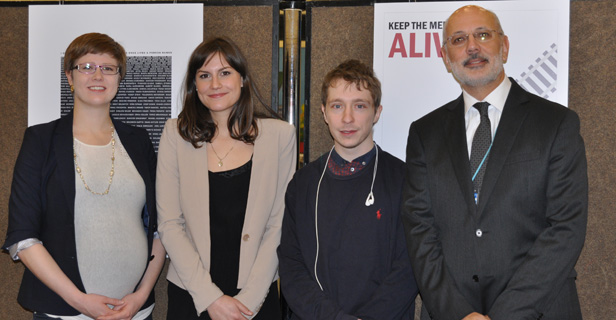 "We cannot build the future without remembering the past; what happened once can recur," warned UN Secretary-General Ban Ki-moon in his message on the occasion of the International Day of Commemoration in Memory of the Victims of the Holocaust, observed on 27 January. It was on this day in 1945 that Soviet troops liberated the Auschwitz-Birkenau extermination camp.

To honour the victims and survivors of the Holocaust, this year the United Nations Information Service (UNIS) Vienna in cooperation with the International Holocaust Remembrance Alliance (IHRA), Yad Vashem, the London Jewish Cultural Centre (United Kingdom), the European Shoah Legacy Institute (Czech Republic), the 2014 Canadian IHRA Chairmanship, and the Holocaust and United Nations Outreach Programme organized the exhibition of the best designs of the International Poster Competition 2013-2014 on the theme "Keeping the memory alive - Journeys through the Holocaust".

A jury of national and international judges selected the 16 best designs from hundreds of entries submitted by students of art and design from 10 different countries, many of whom have no personal connection to the Holocaust. The commemorative event and the opening of the exhibition, which took place at the Vienna International Centre (VIC), featured key-note statements by Yury Fedotov, Director-General of the United Nations Office at Vienna (UNOV), Ambassador Zvi Heifetz, Permanent Representative of Israel to the United Nations in Vienna, Jennifer Townson, Deputy Head of Mission from the British Embassy in Vienna, Mario Silva, Chair of the International Holocaust Remembrance Alliance (IHRA) and Jane Jacobs, Director of International Relations, International School of Holocaust Studies at Yad Vashem. The first, second and third placed winners were also present at the exhibition.

All of the speakers underlined the importance of remembering the Holocaust, a singular and unparalleled expression of human's capacity for evil, and urged everyone not to wane in their efforts to pass on the lessons of the Holocaust to future generations. Ambassador Zvi Heifetz of Israel warned against the perils of Holocaust denial, describing it as one of the various forms of anti-Semitism still prevalent in many societies.

In light of the Hungarian Holocaust Memorial Year 2014, Ambassador Balázs Csuday, Permanent Representative of Hungary to the UN Vienna, reiterated the importance of communicating the gravity and significance of the horrors of the second world war and acknowledged Hungary's role and responsibility in the Holocaust. But the responsibility is not just with States - each and every citizen has the duty to take a stand against all forms of hatred and intolerance.

On the same day that UNIS Vienna in cooperation with the Permanent Mission of Israel to the UN in Vienna, this human world (THW) Film Festival and Topkino organized a Cine-ONU screening of the documentary 'Six Million and One'. Israeli documentary maker David Fisher's film tells the story of four adult siblings retracing the steps of their late father, a Holocaust survivor, who was imprisoned in Gusen und Gunskirchen, two Austrian concentration camps. The film was followed by a panel discussion, which featured Jane Jacobs from Yad Vashem, Sieglinde Witzany-Durde, a teacher and a member of the KZ Gusen Memorial Committee and journalist Itamar Treves-Tchelet with UNIS Vienna Director Janos Tisovszky moderating the discussion.

Various issues were raised by the audience including the difficulties of Holocaust education in general and in Austria, where the notion of Austrian victimhood is still deeply embedded in society, as Sieglinde Witzany-Durde pointed out.

'Six Million and One' is a film characterized by silence as the horrors leave everyone at a loss for words. However inexplicable these atrocities still remain, as the UN Secretary-General said, it is our duty to tell and retell the story of the Holocaust - those who do not remember the past are doomed to repeat it.