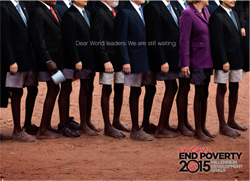 VIENNA, 25 August (UN Information Service) - Stefán Einarsson, 44, a graphic designer from Reykjavík, Iceland, was announced the winner of the UN Ads Against Poverty Competition for his work "We are still waiting", which calls on world leaders to live up to their promises of ending poverty.

The winner will be given the Spanish Presidency award by HM Queen Sofia of Spain at a ceremony in Madrid on Friday 10 September. The ceremony will also be attended by Spanish Secretary of State for International Cooperation Soraya Rodriguez Ramos, chairman of the jury Jacques Séguéla and UNRIC Director Afsané Bassir-Pour.

"I am, of course, delighted that I have won and I sincerely hope that this ad will remind our leaders that they have to keep their promises and achieve the Millennium Development Goals," said Einarsson.

The print ad competition, organised by the UN Regional Information Centre in partnership with European media, UN Information Centres in Europe and supported by the Spanish EU presidency, is part of a Europe-wide campaign to promote the Millennium Development Goals (MDGs). Over 2,000 entries from 34 countries were submitted.

"The level of participation and the quality of the Ads Against Poverty by the European creative community, professionals and amateurs alike, was beyond our wildest expectations. Interestingly, most people wanted to send creative messages to world leaders who will meet in September in New York to take stock of the progress of the MDGs. And there is much progress to report, but obviously not enough, and we can't be flat-lining now. Sincere thanks to our partners both within the UN, amongst the media and of course to our extraordinary jury - another example of the power of partnerships," said Mme. Afsané Bassir-Pour, director at UNRIC.

Exhibitions with a selection of ads will be organized throughout the year in different countries. For the top 30 ads and further information, please see: www.wecanendpoverty.eu. If you are interested in organising an exhibition in partnership with any of our offices in Europe, please contact us.

The High-level Plenary Meeting of the General Assembly will take place 20 - 22 September in New York, hosted by UN Secretary-General Ban Ki-moon. The objective is to take stock of proven successful initiatives and for governments to commit to a concrete action agenda to achieve the MDGs. http://www.un.org/en/mdg/summit2010/index.shtml