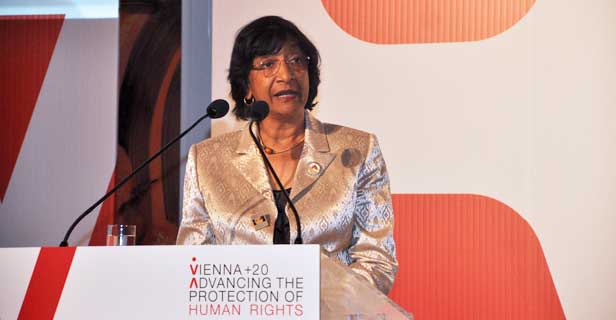 Vienna+20: Advancing the Protection of Human Rights: Achievements, Challenges and Perspectives 20 Years after the World Conference

"As we continue to strive towards a world that acknowledges the rights of all human beings, the Vienna Declaration and Plan of Action, adopted at the World Conference on Human Rights in Vienna in 1993, still sets the agenda for much of our work. The Declaration, which led to historic advances in the promotion and protection of human rights, is the most significant overarching human rights document produced in the past 40 years," said UN Human Rights Chief Navi Pillay. "The VDPA crystallized the principle that human rights are universal, indivisible, interdependent and interrelated, and firmly entrenched the notion of universality by committing States to the promotion of all human rights for all people regardless of the political, economic, and cultural systems," Pillay added.

This year is the 20th anniversary of the World Conference on Human Rights, which took place from 14 to 25 June 1993 in Vienna, assembling more than 10,000 representatives of States, the United Nations and global civil society. It made crucial contributions to a new global human rights regime, such as the creation of the Vienna Declaration and Programme of Action (VDPA) and the establishment of the Office of the UN High Commissioner for Human Rights.

To mark the anniversary, a High Level Expert Conference on 27/28 June 2013 was organized in Vienna by the Austrian Federal Ministry for European and International Affairs in cooperation with the Office of the UN High Commissioner for Human Rights (OHCHR), as well as the Ludwig Boltzmann Institute for Human Rights (BIM) and the European Training and Research Centre for Democracy and Human Rights of the University of Graz (UNI-ETC).

The Conference was opened by the Austrian Vice-Chancellor and Foreign Minister, Michael Spindelegger and the UN High Commissioner for Human Rights, Navi Pillay. The Deputy Secretary General of the United Nations, Jan Eliasson also spoke at the opening session. Over hundred experts from all regions came together to celebrate the achievements in the two decades since the World Conference and to analyse the challenges that lie ahead. Many of the participants of the 'Vienna+20' conference were also present at the World Conference on Human Rights in 1993: Navi Pillay, High Commissioner for Human Rights, participated in the World Conference in 1993 representing a women's activist group from South Africa. Discussions focussed on three key areas:

The action-oriented recommendations from each of these topics together with the outcomes of the conference will be presentated to the UN Human Rights Council and the UN General Assembly by Austria later in 2013.

Jan Eliasson acknowledged progress but he too drew attention to the connection between human rights and other factors: "There is no peace without development and no development without peace and no peace and development without respecting human rights. But if you look around the world you see an absolute brutalization. We need to be determined to change this, because if this goes on, we will see so much hatred in the world that we will start to get numb. Eliasson further added: "Today's problems cannot be solved by the UN alone - you have to bring in the parliaments, governments, civil society, the private sector, the academic and scientific community, and think tanks. What we should achieve is that we don't work vertically. As long as we connect horizontally we can really make a difference."