The Conference is one of the world's largest anti-corruption gatherings and brings together people from Member States, parliaments, inter-governmental organizations, civil society and the private sector. The conference will review of the implementation of the UN Convention against Corruption, the only legally binding universal anti-corruption instrument and discuss preventing corruption, improved international cooperation to better tackle corruption and asset recovery.

The ninth session of the Conference of the States Parties the United Nations Convention against Corruption (UNCAC) concluded today with the adoption of the Sharm El-Sheikh Declaration as well as seven other resolutions and an agreement on the host country for the tenth session of the world’s anti-corruption conference.

Youth for integrity, innovation and lifelong learning: towards a fair and corruption-free society

Young people are just as affected by corruption as others in society. Corruption can affect their prospects for a decent future and employment as well as impeding access to education, health care and other basic services. Corruption is stealing their future, so the world’s 1.8 billion young people have a major stake in countering it.

Recovering with integrity from the pandemic

Preventing and countering corruption is essential to coming out of this crisis stronger, more transparent, accountable and resilient

The COVID-19 pandemic has been an unprecedented emergency for the global community and affected almost every aspect of society as well as creating opportunities for corruption to thrive.

Addressing the gender dimensions of corruption

Corruption harms people of all genders because it reduces trust in institutions and erodes the foundations of democracy and a functioning economy. However, corruption impacts women and men in different ways. The results of corruption often make women more vulnerable, leaving them excluded from decision-making roles and limiting their chances for educational and economic advancement.

Sport has the power to inspire and unite, yet corruption and crime threaten to undermine its positive contribution to society and our lives. The credibility of sport is at stake unless efforts are made to combat illegal betting, competition manipulation, abuse in sport, corruption in major sporting events, the involvement of organized crime in sport, and other illicit activities.

Greed over Need Harms Everyone, Secretary-General Tells States Parties to Convention Against Corruption, Calls for Accountability

Following is the text of UN Secretary-General António Guterres’ video message for the ninth session of the Conference of the States Parties to the United Nations Convention against Corruption, held in Sharm El-Sheikh, Egypt, from 13 to 17 December:

Representatives of the media are invited to a

on Monday 13 December 2021 at 1 p.m. in person in El Wadi Room at the International Congress Centre (ICC), Sharm El-Sheikh.

The United Nations conference taking place in Sharm El-Sheikh is an important global milestone for improving international cooperation against corruption and helping the world recover with integrity from the pandemic. The ninth session of the Conference of the States Parties (COSP) to the United Nations Convention against Corruption from 13 to 17 December 2021 will also support efforts to restore public trust, strengthen effective institutions, promote sustainable development, recover with integrity from the COVID-19 pandemic and ensure economic and political stability.

Speech by Ms. Ghada Waly, Executive Director of the United Nations Office for Drugs and Crime 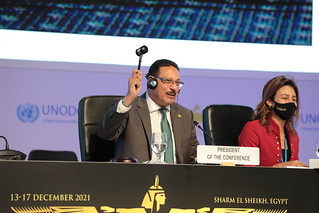 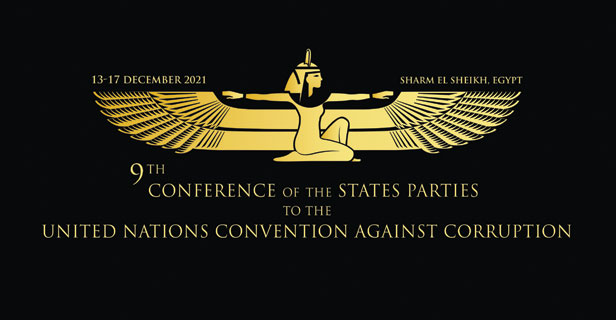 Website of the UN Office on Drugs and Crime